From November 30, face coverings must be worn in shops and on public transport, unless you are exempt. For the latest guidance on new Covid-19 restrictions: gov.uk. 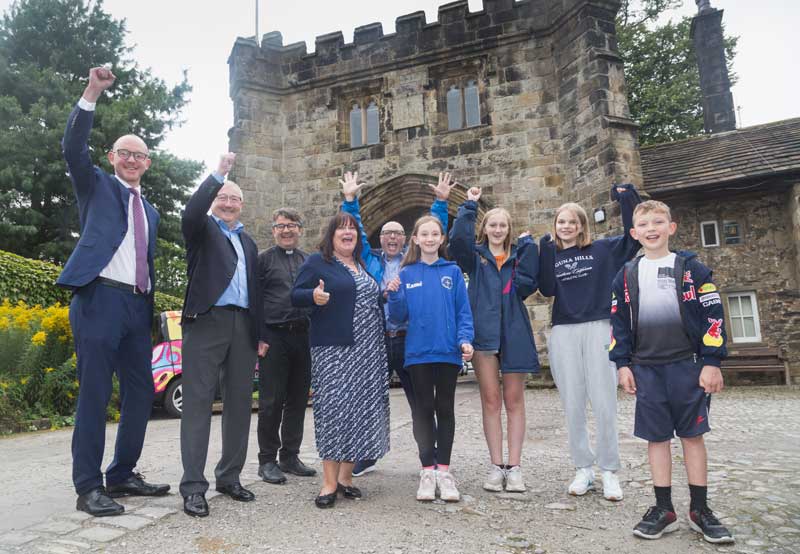 A youth hub has opened its doors at a 13th Century abbey thanks to a unique collaboration between RVBC, the Lancashire Police & Crime Commissioner, Burnley Boys & Girls Club and the Blackburn Diocese.

And anti-social behaviour has reduced dramatically in Whalley after the opening of the hub at the village’s historic abbey three months ago.

The hub was first mooted late last year in an attempt to tackle anti-social behaviour in Whalley, which had become ‘location central’ for gangs of rowdy youngsters from surrounding towns and villages.

The Rev. Adam Thomas from Whalley Abbey then offered the use of the abbey’s gatehouse, while the Lancashire police and crime commissioner stepped forward with £17,000 to turn it into a permanent premises.

The hub now welcomes youngsters aged eight to 18 on Mondays and Thursdays from 6 to 8pm.

It is a safe bolthole, where the youngsters can get out of the rain and off the street, and have a brew and a chat with friends.

Robert Thompson, chairman of the Ribble Valley Community Safety Partnership, which is managed by Ribble Valley Borough Council, said: “Although Ribble Valley   reports the lowest levels of crime in Lancashire, there are growing concerns about the use of illegal substances and their supply.

“Whalley seems to have become location central for youngsters from surrounding towns and villages, who need something constructive and safe to do.

“The hub has been a significant success, giving them a place to meet and engage in positive activity, including respecting the abbey and its environment, which has suffered from vandalism.”

Police and Crime Commissioner for Lancashire Andrew Snowden said: “It has been great to meet some of the people involved in the hub and hear about how this funding is having a positive impact on young people.

“Projects like this can engage young people in the community, build relationships with the local policing team and help the youngsters avoid getting involved in anti-social behaviour.

“I am committed to supporting police officers in Ribble Valley and across the county to tackle the issues that matter to people, such as anti-social behaviour, vandalism and drug-dealing.

“As I develop my Police and Crime Plan, we will be outlining a number of ways that communities can help us address some of the root causes of anti-social behaviour, while committing officers to crack down on offenders and make people feel safer.”

Graham Vernon, of the Burnley Boys and Girls Club, which manages the hub, said: “This is good old-fashioned youth work, that is having a positive impact on the community.

“The abbey has experienced vandalism in the past and basing the hub there has given youngsters some responsibility for the site.

“In fact, since the hub’s launch, there has been a significant reduction in complaints of anti-social behaviour in Whalley.

“The hub has created a space for young people to work with crime and community agencies, as well as build a relationship with our local policing team.

“It gives them a chance to get together to play a variety of games and have a good chat – and there isn’t a mobile phone in sight!”

The hub, which is run by one paid member of staff and five volunteers, has 160 members and 400 Facebook followers.

Each session includes an hour of a sport, drama, yoga, art and craft, or a general discussion, followed by an hour of games aimed at building the group dynamic, such as hide-and-seek, tig, or bulldog.

The youngsters also take part in outdoor events at the abbey and several are to deliver a presentation at a forthcoming a meeting of Whalley Parish Council.

The Burnley Boys and Girls Club is now fundraising for the renovation and upkeep of the hub, and appealing for local tradespeople to help transform the space.