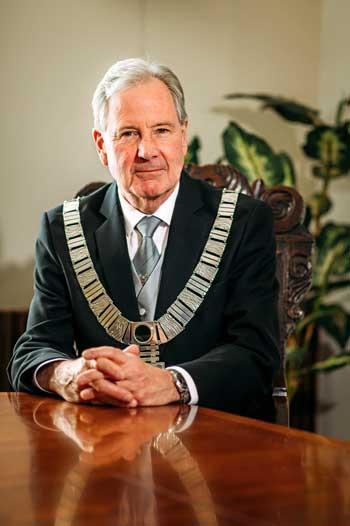 The Ribble Valley Jubilee Trail will be launched on Thursday, 1 September, and include route maps and a dedicated app available at ribblevalley.gov.uk.

To celebrate the launch of the trail, keen hiker Councillor Hirst is to walk it in aid of his chosen charities, the MS Society, the Pink Ribbon Foundation and Project Linus.

He has set a generous £5,000 fundraising target for the three charities during his mayoral year.

And his trail has already notched up sponsorship from multi-award-winning outdoor shop Whalley Warm and Dry.

Councillor Hirst said: “Ribble Valley is one of the most scenic boroughs in the country, much of it designated an Area of Outstanding Natural Beauty, and a veritable walker’s paradise, with rolling hills, picturesque villages, stunning landscapes and some of the best food and drink for many a mile.

“Ribble Valley has a close association with Her Majesty the Queen and this trail takes in some of her Duchy of Lancaster land, particularly the centre of the kingdom at Dunsop Bridge.

“I hope the Ribble Valley Jubilee Trail will become a popular attraction for keen hikers and ramblers across the country, and to get the ball rolling I will be walking it to raise funds for my chosen charities.”

The circular trail starts in Whalley and takes in Pendle Hill, Downham, Bolton-by-Bowland, Slaidburn, Chipping, Hurst Green and Mellor, before finishing in Whalley.

The trail takes six days or so to complete and features a range of terrains requiring a degree of fitness and competence.

It is one of a series of initiatives in Ribble Valley throughout 2022 marking the Queen’s Platinum Jubilee, including a Freedom parade in May by the 1st Battalion of the Duke of Lancaster’s Regiment, beacon-lightings and the planting of trees and ‘tree avenues’ throughout the borough.

The mayor is walking the trail following the 1 September launch to help raise £5,000 for his chosen charities, the MS Society UK, the Pink Ribbon Foundation, which provides financial support to UK charities that help people with or who have been affected by breast cancer; and Lancashire Linus, a voluntary organisation that creates patchwork quilts and blankets for children experiencing trauma.

You can sponsor Councillor Hirst at justgiving.com/crowdfunding/ribble-valley-borough-mayor, or by phoning Ribble Valley Mayor’s secretary Olwen Heap on 01200 425111.

Further information and the trail app will be available from 1 September at ribblevalley.gov.uk.