Ribble Valley's Armed Forces Covenant is a voluntary pledge of mutual support between the community and the local Armed Forces community.

We are working with the Armed Forces and veterans groups to improve local services for people who are ex-service or still serving.

The covenant encourages the integration of service life into civilian life and encourages members of the Armed Forces and community to help their local community. It will see a strengthening of Ribble Valley's military connections and celebrations.

Section 4 of the Armed Forces Covenant covers all the work we have done and the work we plan to do as our part of the covenant agreement.

The report sets out major achievements of the armed forces covenant and highlights remaining challenges and new commitments. 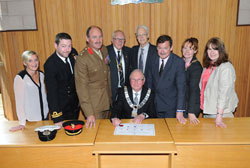